"The Office" on "Friday Night Lights"

As I am sitting here watching last night's episode of "Friday Night Lights" on my DVR, I hear a familiar theme song start playing...

Coach Taylor looks up from his notebook to see his game film has stopped and "The Office" has come on his TV.

Taylor's sister-in-law (Shelly) comes in the room and as a bewildered Taylor stares at her, she has this dialog:

Shelly: "(Gasp) Is that The Office? Oh my God, I love this show, I'm so addicted to it. I was so scared that it didn't tape. Have you ever seen it? It's so good. Actually, I don't know if you would really like it. It's very talky."

Woohoo! I got so excited just hearing the theme song. COME BACK SOON OFFICE!!!
Posted by ScrantonBranchOffice at 3:02 PM 1 comment: 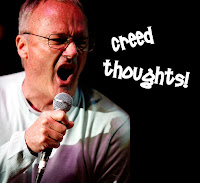 The Office's Music Man - Creed - has posted a new blog over at Creed Thoughts on NBC.com.

"I want to say something about naps. They’re great. I can’t get enough of them. I take as many naps as I possibly can – at home, at work, malls, public restrooms, adult movie theaters. At work, there’s this closet downstairs that’s filled with really comfortable mops. You bundle those mops together and you’ve got yourself an instant mattress. Not only that, you also end up getting a pretty good cleaning, depending on how much you roll around when you sleep."

Click HERE to read the whole thing.
Posted by ScrantonBranchOffice at 8:56 AM No comments: 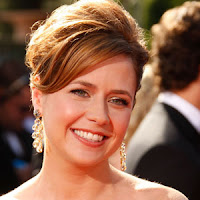 MySpace.com has launched a special celebrity section. It's for official pages of musicians, comedians, actors/actresses, etc.

Jenna Fischer, the QUEEN of MySpace, is their first Q&A on the site.

"Where is the romance going with you and Jim on The Office?
I have no idea. We don’t have any scripts. They were still going strong in the last episode I read, but that is all I know. I heard Rashida Jones [who plays Jenna's character Pam's romantic rival] was going to come back for a couple of more episodes before the end of the season, but they didn’t tell me why. I’d like to know!"

You can read it by clicking HERE.
Posted by ScrantonBranchOffice at 12:00 AM No comments:

"The Office" on NBC has been nominated for the following NAACP Image Awards.
The Awards will be broadcast live on FOX on Feb 14th at 8pm EST.
The categories are for directing and writing.

You can see the entire list HERE.
Posted by ScrantonBranchOffice at 9:16 AM No comments: 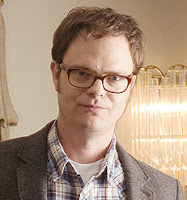 Entertainment Weekly interviewed Rainn Wilson about the Spirit Awards, Juno and of course how he's dealing with the WGA Strike and being away from The Office.

"Yeah, it was a really lovely break, and it's just turned into a living hell. I just spoke to Jenna [Fischer, who plays Pam on The Office] the other day and we are so ready to go back to work. I feel bad because they had so many amazing things planned for season 4 with Dwight and Angela, and I was so excited to film those. And we may not have a season 4! Period. That may be it. It's a very real possibility."

"Well, I think Leslie [David Baker], who plays Stanley, has taken up rock climbing and Meredith is actually a prostitute now. Steve Carell is a pool shark. And John Krasinski has gone into international diplomacy. So people have stayed very active and are doing a lot of very interesting stuff. I've taken up spelunking. Do you know what that is?"

You can read the full length interview by clicking HERE.
Posted by ScrantonBranchOffice at 9:11 AM No comments:

Melora Hardin was at the premiere of 27 Dresses and PopSugar.com has the story and some great photos.

You can read it HERE.
Posted by ScrantonBranchOffice at 3:57 PM No comments:

I LOVE The Office...

I was sitting in a hotel room on a church retreat and happened to catch the "Back from Vacation" episode and thought it was really great. I got home and bought the second season on DVD, and watched it all in like 1 day. Then I knew I had to have more, so I downloaded the whole 1st season, and all the episodes in season 3 up till the vacation one I had just seen. I am now in love with the show, it's probably the best show ever, and I have seen a lot of T.V.

I own all three seasons on DVD and iTunes (sorry writers) and I have my own Dwight Bobble head that sits at my cubicle in my office.

My favorite characters are:

After I check ScantonBranchOffice.com I often go to theofficechat.com but thats about it.

My favorite All Time Moments are:
- The long silent pause between Jim and Pam in the "Booze Cruise"
- Dwight and Pam being friends, when Dwight gets a concusion in "The Injury"
- Ryan blows the sales call with Stanley

I have yet to meet a cast member, although I think it would be really cool and I would hope that I didn't freak out to much and hope I had a camera.

"I think the biggest reason I like the Office, other than being just a great show, is that fans of the show are in, what feels like, a giant club. It's like a fraternity. If you run into a fan on the street, and you speak a totally different language with one other that onlookers just don't get. And I think that is really cool, fans being able to be friends with one another because of the show.
I also think the way the show is filmed is amazing. I think it makes the audience feel like your part of the show, which is why, I think, it has such a strong fan base."

Now it's your turn! Tell us why you LOVE The Office! Click HERE for details.
Posted by ScrantonBranchOffice at 9:50 PM 1 comment:

Website, TheVegasEye, reported that John Krasinski was in Vegas recently for a party with some friends.

"John Krasinski of NBC's The Office was in town for a friend's bachelor party he dined in Hard Rock's latest dining attraction AGO."

It's amazing what we'll report on while waiting for the show to come back huh?

Read the whole thing HERE.
Posted by ScrantonBranchOffice at 9:30 PM No comments:

Mindy Kaling Among the New Faces of Indian Decent in Hollywood 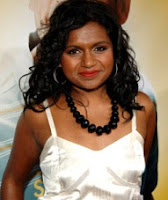 In an article I've found in the Hindustan Times, Hollywood stars such as Kal Penn (24, Harold & Kumar Go To White Castle), Sendhil Ramamurthy (Heroes) and Mindy Kaling are showing that stars of Indian decent are becoming more common.

"There are also the desis who work in the less glamorous areas of entertainment like casting, writing and directing — like Mindy Kaling, a writer-cum-actor of Tamil descent, who writes and produces hit comedy show The Office. “I feel completely free when I write for the character of Kelly Kapoor. She isn’t a nerd or a math whiz. She’s actually kind of a fool. That is really fun, to play against stereotype like that," she says of the character that she plays (and writes) in the series."

"Mindy Kaling grew up as Vera Chokalingam.... “People would mangle Chokalingam, then feel sheepish about it. The last thing I wanted was for casting agents and producers to be hesitant to say my name,” explains Kaling."

You can read the whole article HERE.
Posted by ScrantonBranchOffice at 8:35 PM No comments: