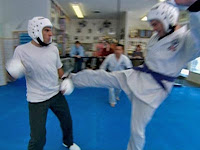 On November 1, 2005 Kevin told Michael to "sweep the leg" as Michael and Dwight fight it out in Dwight's dojo. We also learned, that if you like a girl, don't lift her into the air infront of all of your co-workers. She won't like that - or you. Until you give her a bag a sour cream and onion chips anyway.

"The Fight" News Items:
Interview with Lance Krall (Sensei Ira)
Posted by ScrantonBranchOffice at 10:44 AM No comments: