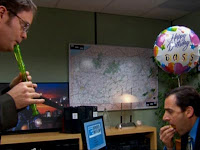 Michael's birthday was celebrated on March 30, 2006 and who better to throw a party for Michael than, well, himself. Also, Kevin is worried he has cancer and even Angela feels bad for him! Live Strong! Fun fact of the episode? Michael's favorite song is "For The Longest Time" by Billy Joel.

It's Michael's birthday (which he proudly shares with actress Eva Longoria), but nobody in the office seems to care---except for Dwight. Meanwhile, Kevin waits to hear from his doctor about whether or not he has cancer. This upsets the staffers, but none more so than Michael, who sees the medical crisis taking attention away from his special day. - TV Guide