Check out Jenna Fischer's MySpace blog about her recent birthday in Las Vegas!

Read the blog, complete with party pics, here!
Posted by Katie at 3:15 PM No comments:

"The Office" Loses Carell To Films 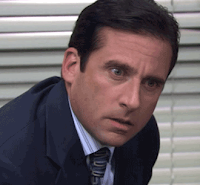 Entertainment Weekly's guru of gossip, Ausiello, has reported today that what we all feared has happened. Steve Carell seems to be on the way out of The Office.

"NBC sources are confirming to me that Mr. 40-Year-Old Virgin, has opted out of the rest of his contract with the show. The source also mentions that we have already met his replacement. Andy Buckley, who plays CFO David Wallace has had more of a presence on the show because it was apparently a test to see how audiences reacted to him."

To read more details, go to EW by clicking HERE.

What do you think about this? Will this drastically change the show? Leave your TwoCents below.
Posted by KP at 7:48 AM 10 comments:

Here's a piece from a Q&A he did with the Chicago Times.

"Q: Have you watched every episode of the American remake of "The Office?"

A: I've probably watched every episode of Series 1 and 2, but now I probably watch one in three. I watched two on the plane this time of the last series.

Q: Your version only ran 12 episodes. This season finale of the U.S. "Office" will make it 100 episodes total. Does having an open-ended series hurt the storytelling?

A: It makes it more difficult.When you've got a finite arc, it's by definition more conclusive. You get out on top. The love story alone is hard to keep going. Will they, won't they? Yes they have. That's the end of that.

But they haven't been a slave to the realism or the fake documentary either, which you can't be, because you're thinking, "Why are they still filming there? Why is there a film camera following him on the bus?" That was the single most important thing for us, because it told us why the characters were acting like that. And ours was much more about characters thrown together. And this is more a traditional sitcom than ours ever was."

"The Office" All Week Long!! 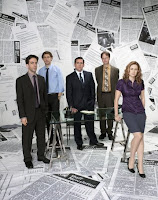 "The Office," produced by Reveille, Universal Media Studios and Deedle-Dee Productions, has been sold to stations from many of the nation's leading broadcast groups, including Fox, CBS, Tribune, Peachtree TV, Sinclair, Gannett, Meredith, Hearst-Argyle, LIN, Local TV and more.

"The Office" has been sold to the Fox Television Stations in the nation's top markets, including New York, Los Angeles, Chicago, Dallas, Houston, Washington D.C., Phoenix, Minneapolis, Orlando, Baltimore and Memphis. Additional markets include the CBS Television Stations in Philadelphia, Boston, Seattle, Miami and Pittsburgh. The series has been sold in 50 of the nation's top 50 markets.
Posted by KP at 9:37 AM No comments: