Webisode #1 of "Kevin's Loan" has arrived!

You can also download Kevin's debt spreadsheet by clicking HERE.

And HERE is the photo album of the first episode.

I've seen all the webisodes and they are HILARIOUS! I will be posting an interview I recently had with Mindy and Brian, they speak about the Webisodes, so look out!
Posted by ScrantonBranchOffice at 8:03 PM No comments:

Watch "The Office" on Family Feud

You can also see a photo gallery from the episode by clicking HERE.
Posted by ScrantonBranchOffice at 7:59 PM No comments:

I just received these from FOX. You gotta love those guys! Click the thumbnails for larger photos.

“The Rocker” is Robert “Fish” Fishman, the drummer for an eighties hair band. He's living the rock n’ roll dream… until he is kicked out of the group. Twenty years later, the desperate rocker joins his nephew’s band, “A.D.D.,” finally reclaiming the rock-god throne he’s always thought he deserved -- while taking his much younger bandmates along for the ride of their lives.

Posted by ScrantonBranchOffice at 7:38 PM No comments:

I've been out of it for a while, but this was a fun night!

Posted by ScrantonBranchOffice at 1:39 PM No comments: 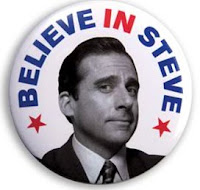 NBC's webpage has a Nominate08.tv branch that lists hopefulls for Emmy consideration.

Of course we will follow The Office through the Emmys!

Be sure to watch the promo video too!

Posted by ScrantonBranchOffice at 1:31 PM No comments:

Posted by ScrantonBranchOffice at 11:12 AM No comments: 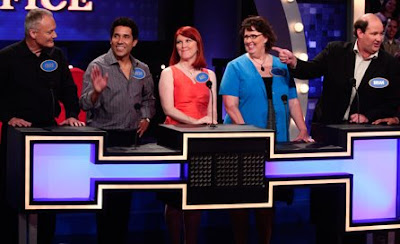 Don't worry - we won't see Creed enter the Joust versus Wolf, it's all on Celebrity Family Feud!

The episode airs on July 8th.

"The Office" is the multi-award-winning NBC sitcom that airs on Thursday nights. The show is based on the fictional Dunder Mifflin paper company set in Scranton, Pennsylvania, and the day-to-day life of those who work there. The entire show is shot in "mockumentary" style.

Charity: Children’s Advocacy Center of Northeastern Pennsylvania
www.nepacac.org.
Posted by ScrantonBranchOffice at 11:07 AM No comments:

"When The Office's Angela Kinsey made her first post-birth appearance at the TV Land Awards in this dress, you all loved it, commenting on how it skimmed over any leftover bumps and pooches while accenting mama's new assets (thanks, nursing!).

We hunted down the dress, and discovered it's from BCBG Max Azria. It's their matte jersey dress, and is made of 94 percent polyester and 6 percent spandex. It features a jungle leaves print with blue border and flutter sleeves, and comes in sizes xtra-xtra-small, xtra-small, small, medium and large. Priced at $180, it can be purchased online. Through Sunday, July 6th, BCBG is running a holiday sale, allowing readers to snap up the dress at $153, an additional 15% off!"

Click HERE for the whole story...
Posted by ScrantonBranchOffice at 10:40 AM No comments: 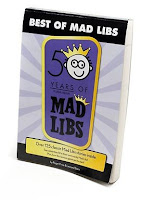 This little nugget comes from the Seattle Times:

"To celebrate [the 50th anniversary of MadLibs], publisher Price Stern Sloan has released its newest book, "Best of Mad Libs" ($6.99), which includes a collection of classic stories, as well as a handful of Mad Libs filled in by celebrities. (Only in the blissfully disturbed Mad Libs universe would these things be true: Steve Carell is a fluorescent bruschetta, Anne Hathaway had a role in "Brokeback Risotto" and Alan Arkin was discovered by casting agent Albert Schweitzer.)"

Read all about it HERE.
Posted by ScrantonBranchOffice at 10:34 AM No comments:

That's right. Check out the list of Entertainment Weekly's top 100 best shows from 1983 to 2008 and you'll find your "Office" if your boss with either David Brent OR Michael Scott!

The BBC Version ranked in at #17 while the NBC version holds its own at #61.

Do you agree with this list? Should NBC be higher?

"THR: MARK, DO YOU EVER FEEL SHACKLED BY THE CREATIVE LIMITATIONS OF WORKING IN BROADCAST AS FAR AS SITUATIONS AND LANGUAGE AND ALL OF THAT?

MARK HARMON: I think you just have to be fine with wherever and whatever you are. I'm on a successful series. What matters, what's nice and gratifying, is that people are watching us. It's funny, I was once on a show where if you changed one word the writers would come after you and tell you they could find any actor to say those same words. And this was a show heralded as really good television. Eventually, we'll probably be doing sex in outer space.

RAINN WILSON: I would love to have sex in outer space."

Click HERE for the article.
Posted by ScrantonBranchOffice at 10:27 AM No comments:

I've seen the Webisodes and will do a full review of them closer to the release date. They are HILARIOUS!

In "Kevin’s Loan," the second series of "The Office" webisodes, Kevin (Brian Baumgartner) pursues a unique solution in an effort to pay back his looming gambling debts. This installment also stars Oscar Nunez, Leslie David Baker and Craig Robinson.

NBC.com, the Emmy Award-winning broadcast network website, is a leading online and mobile destination for television and interactive entertainment. With both derivative and web-exclusive programming, NBC.com pioneered the "360" experience with "Heroes 360," which gave viewers a way to extend their entertainment experience beyond the broadcast, and the first weekly social networking experience attached to a primetime entertainment program with "Dunder Mifflin Infinity." The site offers full episode streaming of many NBC Entertainment shows as well as short clips, interactive games and social networking, including user-generated content. NBC.com continually develops new ways for consumers to experience entertainment content on both existing and emerging platforms. The site is the recipient of multiple Emmy and Webby awards for its content and applications. Please log on to www.nbc.com to learn more.
Posted by ScrantonBranchOffice at 10:19 AM No comments: 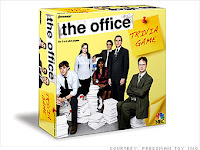 Mindy Kaling, writer, co-executive producer and the actress known as the chatty Kelly Kapoor on NBC’s “The Office,” will join fans in Scranton, PA, on Saturday, July 19 as Dunder Mifflin’s hometown becomes the first city to offer the new "The Office" DVD Board Game and "The Office" Trivia Game by Pressman Toy and licensed by NBC Universal Television Consumer Products Group.

Ms. Kaling will officiate “The Office Games” – a full day of Dunder Mifflin style fun – starting with a 2K Fun Run and ending with a Beet Eating Contest that would make Dwight proud. The day’s events will take place in and around The Mall at Steamtown in Scranton.

Continue Reading...
Posted by ScrantonBranchOffice at 10:18 AM No comments:

CLOCK IN FOR MORE ANTICS FROM YOUR FAVORITE CO-WORKERS!

OVERVIEW:
The Office is back with even more inappropriate remarks, uncomfortable silences, and obnoxious behavior in the complete fourth season of the Primetime Emmy® Award-winning series! Steve Carell (40 Year-Old-Virgin) is back in his Golden Globe® -winning role as Michael Scott, the clueless boss of the Dunder Mifflin's Scranton branch who manages to create unending comical drama despite his best intentions. Trusty and loyal assistant-to-the-regional manager Dwight Schrute (Rainn Wilson) continues to uphold the office honor as Jim (John Krasinski) and Pam (Jenna Fischer) find ways to meddle with him and encourage Michael's hysterics. Plus, see "wunder kid" Ryan (B.J. Novak) in his new role at corporate as he pushes the infinite limits of Dunder Mifflin, often pushing Michael to his limits as well.