But they are finally here! 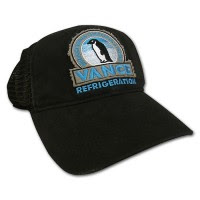 Looking for a way to stay cool in the sun?
Look no further.
This Vance Refrigeration Vintage Trucker Cap not only blocks the sun's harmful rays, it also reminds you of your favorite refrigerator repair man... Bob Vance, Vance Refrigeration.
- $22 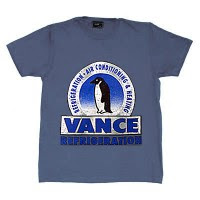 Shirt is light-weight, ring-spun and features a Euro-fit. 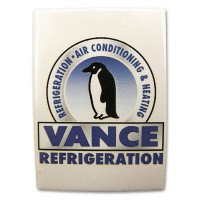 Place this Vance Refrigeration Magnet on your fridge and you'll never forget that happiness is a cold refrigerator. Just ask Bob Vance!
- $5
Posted by ScrantonBranchOffice at 9:59 PM 1 comment:

THE STRIKE IS OVER!!

LOS ANGELES, NEW YORK -- The membership of the Writers Guild of America, West (WGAW) and the Writers Guild of America, East (WGAE) today voted overwhelmingly in favor of lifting the restraining order and ending their 100-day strike that began on Nov. 5. 3,775 writers turned out in Los Angeles and New York to cast ballots or fax in proxies, with 92.5% voting in favor of ending the work stoppage.
“The strike is over. Our membership has voted, and writers can go back to work,” said Patric M. Verrone, president of the Writers Guild of America, West. “This was not a strike we wanted, but one we had to conduct in order to win jurisdiction and establish appropriate residuals for writing in new media and on the Internet. Those advances now give us a foothold in the digital age. Rather than being shut out of the future of content creation and delivery, writers will lead the way as TV migrates to the Internet and platforms for new media are developed.”

“The success of this strike is a significant achievement not only for ourselves but the entire creative community, now and in the future,” said Michael Winship, president of the Writers Guild of America, East. “The commitment and solidarity of our members made it happen and have been an inspiration not only to us but the entire organized labor movement. We will build on that energy and unity to make our two unions stronger than ever.”
WGAW and WGAE members will next vote to ratify the tentative three-year contract with the Alliance of Motion Picture and Television Producers. The membership ratification vote will be conducted by mail and also at membership meetings on February 25, 2008.

Strike SO Close to Being Over...

The staff at the ScrantonBranchOffice.com is on a little hiatus recently and will return soon, with all the recaps, news and more that you expect. But we had to post some information here for you on the strike.

"Leadership for the Writers Guild of America spent most of the weekend briefing its members on a new contract that they say addresses the key issues that led to the 3-month-old strike. WGA membership on both coasts will meet again tomorrow to vote on whether to end the strike, with a vote to ratify the new contract to follow."
The Star Ledger

When will the shows come back? TVGuide.com has a constantly updated list. Click HERE to see it.
"The Office
Expected to shoot 5 to 10 new episodes to air in April/May"

""If the strike is called off, we are planning to do another six episodes this season," said Greg Daniels, show runner for NBC's "The Office.""
-Newark Star Ledger
Posted by ScrantonBranchOffice at 9:04 AM No comments: