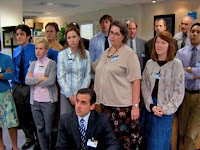 May 4, 2006 gave us a laundry list of pranks that Jim has played on Dwight - Jim felt bad by the end... but then, not so much! Also, who complained about Pam's wedding planning? Jim!?!? Not a win win... win situation.

Michael's highfalutin attempts to resolve conflicts in the office only serve to stir up petty differences and forgotten arguments among his employees, causing bedlam and tumult at Dunder Mifflin. Also, the workers get their ID photos taken; and (some) staffers receive Pam's save-the-date notices for her wedding. - TV Guide
Posted by ScrantonBranchOffice at 12:00 PM No comments: