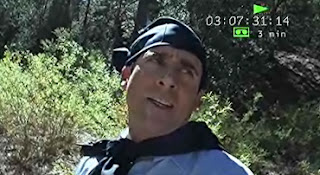 After Ryan excludes Michael from a corporate wilderness retreat, Michael heads into the woods for his own survival adventure with nothing but the suit on his back. Back at work, Jim tries to revolutionize the office birthday party.

So, what do some of your favorite Office Fan Site owners think about this episode? Let's find out!

Everyone into the Conference Room - NOW!

----------
KP
TheTwoCents.com
Favorite Moment: Michael scaring Oscar with his cake.
Favorite Quote: Michael: "That's what she said." Jim: "That's what who said?" Michael: "I never know."
Overall Episode Grade: B
My TwoCents: I thought this was a funny episode, especially when I went back and thought about Creed and Jim's reaction to Toby, but it felt disjointed. Maybe because they had to deal with being "GREEN"?

----------
Jenny
MTT
Favorite Moment: Jim and Michael talking at the end. So heartwarming and heartbreaking. Michael teaching his protege a few things? Sweet. Jim realizing he may be there another ten year? Not so much. But what can I say? I always love those Jim/Michael moments.
Favorite Quote: "You tell her it's for Creed. She'll know what that means."
Overall Episode Grade: A-
My TwoCents: It was another great episode -- until the end. I can't
believe there's only one left before they run out, but I support the
writers' strike so I'm just going to accept reruns until our favorite
writing team gets what they deserve.

----------
Adam
www.OfficeQuotes.net
Favorite Moment: Jim realizing that it's hard to get people to like you as a manager.
Favorite Quote: I HAVE HEMORRHOIDS!
Overall Episode Grade: A
My TwoCents: I actually really liked this episode. Possibly my favorite of the season!

----------
Donna
www.lifeintheoffice.com
Favorite Moment: When Jim said he didn't think he would still be at his job in ten years. Then Michael said, "that's what I said too". After being the boss all day, and not really liking it, Jim had a "light-bulb" moment here. Where is he going?
Favorite Quote: Michael: "Take a look at that, I tented my pants"
Overall Episode Grade: C

----------
Devin/Spamster
theofficechat.com
Favorite Moment: Dwight and Michael's car ride into the "wilderness".
Favorite Quote: "I will remain close by to give unseen moral support. But I will never help him. I will let harm befall him. I will even let him die." - Dwight
Overall Episode Grade: B-
Posted by ScrantonBranchOffice at 8:51 AM No comments: 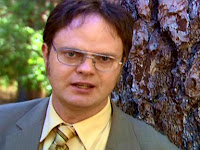 INTO THE WOODS-SPECIAL GREEN WEEK EPISODE--After Ryan (B.J. Novak) excludes Michael (Golden Globe winner Steve Carell) from a corporate wilderness retreat, Michael heads into the woods for his own survival adventure with nothing but the suit on his back. Back at work, Jim (John Krasinski) tries to revolutionize the office birthday party.