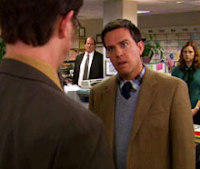 A FIGHT TO THE FINISH--The office is on eggshells because Andy (Ed Helms) still hasn't found out about fiancee Angela's (Angela Kinsey) affair with Dwight (Rainn Wilson). When Michael (Golden Globe winner Steve Carell) spills the beans, Dwight and Andy take matters into their own hands. Meanwhile, Michael is nervous about being called down to corporate for a meeting with Wallace (Andy Buckley).