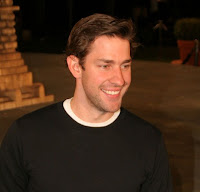 John was quoted in Variety as saying about Cloverfield:
"John Krasinski, star of NBC's "The Office": "I thought it was great! I didn't have any expectations so it shattered them. I think it's both an incredibly innovative script and idea to bring back the monster genre, but they also started breaking some boundaries in film. The night vision shot in the tunnel was wild. It was kind of like 'Blair Witch' on speed.""

You can read what many celebs said about it HERE.

Yes, it's true. John Krasinski now knows what the monster is in J.J. Abrams project.

John was among MANY celebrities who poured out to watch the premiere last night and IESB.net has photos of them all. And no - Rashida Jones wasn't with him.

You can check out the whole photo spread HERE.
Posted by ScrantonBranchOffice at 10:44 PM No comments:

They even expect some of the cast and crew to show up!

"4:30 - 7:15PM: The Office — A special screening of two episodes of NBC’s hit comedy series The Office will begin with a panel discussion with guests from the show (TBA). The episodes "Business School" and "Traveling Salesman" will be screened, followed by USC faculty and business leaders discussing the business issues addressed within the show."

You can read all about it and even how to attend by clicking HERE.
Posted by ScrantonBranchOffice at 9:20 PM No comments:

The Scranton Branch (not this site, but the real .. umm fake .. branch in Scranton) has released their newest newsletter.

We have a memo from Pam about ice-skating, Dwight giving us the genius of Mose and a memo from Toby:

"Also, to whoever altered my own file, I'd like to state for the record that I am not, nor have I ever been, a poo-eating butt-bot. I'm not even sure what that is."

If you didn't get it in your mailbox, you can read it HERE.
Posted by ScrantonBranchOffice at 8:43 PM No comments: 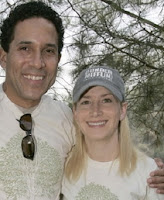 NBC is using their stars wherever possible!

TVGuide.com is reporting that Angela Kinsey and Oscar Nunez will be guest judges on the upcoming season of "Last Comic Standing".

"But this time, producers will replace regular judges with a revolving door of celebrity talent scouts. "I'm going to be nice and pregnant, so entertain me," quips Angela Kinsey, who will whittle down Los Angeles-area wannabes with The Office costar Oscar Nunez."

My question - how could they leave Brian/Kevin out of this? Don't they travel in 3s?

You can read all about it HERE.
Posted by ScrantonBranchOffice at 11:15 AM No comments:

With the motherly glow all around her, Angela Kinsey joined a group of other celebrities at the Hyatt Century Plaza in Los Angeles recently for a gift give away they called "Baby Boom Boom".

Angela left there with a product called a Bib-A-Roo by a company named L'ik Darlins.

You can read the whole article HERE.

Celebrity-babies.com has a story about Baby Boom Boom and has this great quote:
"She also shared a cute tidbit for Office viewers: Rainn Wilson calls Angela up every couple weeks to ask how 'Dwight's' baby is doing!"

Awww, don't you wish we could be watching that unfold ON TV?
Posted by ScrantonBranchOffice at 10:14 AM No comments:

"The Office" Going to College

Well, clips of the show are anyway.

NBC has struck a deal with an organization called The University Network which shows items such as entertainment, news, weather, etc. on college campus closed network televisions.

According to Media Post Publications:
"Under the arrangement, NBCU will provide short-form clips (90 seconds or less) from shows ranging from "Late Night with Conan O'Brien" to "The Office" to news features focusing on the presidential campaign and issues germane to college kids. NBCU content will be provided daily, and can be customized for specific markets. So, local stations owned by NBC can provide weather, news and sports information in their respective areas."

You can read more about it HERE.
Posted by ScrantonBranchOffice at 10:03 AM No comments:

According to our friends, The Hollywood Reporter, Brent Forrester and Mindy Kaling have signed on for new web projects with a company called 60Frames.

"A new company fronted by former UTA agent Brent Weinstein is launching the biggest slate of professionally produced originals to ever hit the Internet.

The projects first out of the gate at 60Frames include "Erik the Librarian Mysteries," from "The Office" producer Brent Forrester, about a demented librarian. The series also features "Office's" Mindy Kaling."

You can read the whole article HERE.
Posted by ScrantonBranchOffice at 10:58 PM No comments: 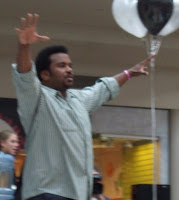 Read the article HERE.
Posted by ScrantonBranchOffice at 10:51 PM No comments:

The first Official NBC merchandise is fittingly: A Refrigerator Magnet.... As I admired my logo and creative-photographic genuis, I realized that we desperately need a name for the little-bugger, and so, I turn to you for help in naming my penguin."

You can go to his blog, and suggest a name, by clicking HERE.
Posted by ScrantonBranchOffice at 1:51 PM 1 comment:

Celebrity-babies.com has a few photos (this one included) of Angela Kinsey proudly showing off her baby bump.

Angela was attending the premiere of "The Business of Being Born".

You can see the photos over HERE.
Posted by ScrantonBranchOffice at 10:26 AM No comments:

"The Office" in Chile

Nope, not another Branch Office, but a remake of "The Office" has been signed for creation in the nation of Chile.

Variety reports:
"It's the first format deal in Latin America for Ricky Gervais and Stephen Merchant's comedy and the first Spanish-language version.

"We stopped making 'The Office' in 2003 but the rest of the world didn't," Gervais said. "I won't be happy until I see an Inuit doing the dance."

"The Office" airs in 90 countries with remakes in the U.S., France and Germany."

Maybe we'll be able to see the premiere episode and see if it steals from the U.S. version that stole from the BBC version.

You can read the article HERE.
Posted by ScrantonBranchOffice at 4:59 PM No comments:

Rashida Jones Says There Is No Nepotism in Hollywood 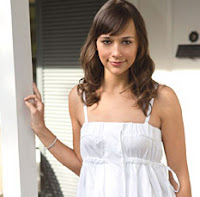 nep·o·tism (np-tzm)
n.
Favoritism shown or patronage granted to relatives, as in business.


Here's what Rashida Jones says, to Details magazine, about the existence of nepotism in Hollywood:

"Mindful of her parents’ admonition that “nothing should be handed to you,” Jones got her college degree before trying her hand at the family business. And even then, she says, nepotism wasn’t a factor. “People don’t believe this, but Hollywood really is a meritocracy. There are too many jobs on the line for anyone to do any favors, and nobody has ever said, ‘Let’s give that girl a part because her father is famous.’”

You can read the rest of the article HERE. And yes girls, the article mentions John Krasinski too.
Posted by ScrantonBranchOffice at 12:38 PM No comments: 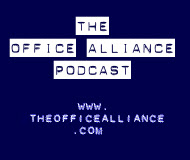 The girls at the OfficeAlliance podcast were nice enough to mention us in their fandomicity section of their Jan 7th Podcast.

If you listen around the 39:00 mark of the show you'll hear our little shout out for the SBO!

"The Office" and the OVAL Office?

Vanity Fair has a very fun article where they replace the Oval Office with THE Office.

"Question—who has the following characteristics, Bush or Michael Scott: smug, self-centered, and isolated; prone to inappropriate comments and malapropisms; fond of engaging in philosophical discourses that are spectacularly muddleheaded and self-mythologizing? If you answered both, you would be correct. And don’t forget the pathetic attempts at humor. Michael: the day he tried to boost office morale amid rumors of layoffs by giving Meredith (the boozy redhead) a birthday party, and then ruined the moment with a card that read: “Meredith, Let’s hope the only downsizing that happens to you is that someone downsizes your age.” Bush: his ill-conceived attempt to amuse attendees at the Radio and Television Correspondents’ Association Dinner the year after the Iraq invasion by conducting a mock search for weapons of mass destruction in the Oval Office. (The month of the president’s poorly reviewed antics, 52 coalition troops died in Iraq.)"

Read the whole article HERE.
Posted by ScrantonBranchOffice at 9:37 PM No comments: