Posted by ScrantonBranchOffice at 9:40 AM No comments: 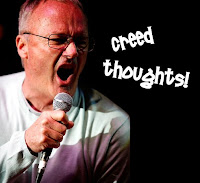 Yeah, you just need to read it. It's over HERE.
Posted by ScrantonBranchOffice at 7:36 AM No comments:

With "The Office" coming back with NEW episodes one week from tonight, we are so excited to give you Office fans this exclusive interview with Kate Flannery who plays Meredith on "The Office"!

Kate, who has a great blog on TVGuide.com every week, was kind enough to take a few moments out of her busy schedule to share her TwoCents with us about the WGA strike, returning to work, what's coming up next and more.

ScrantonBranchOffice: FINALLY Back to work. What was the first day back on the set with everyone like?
Kate Flannery: Great to be back. It felt like there were not enough hours in the day. It was such a relief and a joy to see everyone. Lots of laughs and hugs. The NBC promo department was filming so all those promos they've been showing of us laughing and hugging are all very genuine because they were shot that first day back! I am at the very end of the new promo --laughing with John Krasinski! Genuinely happy to be back!

SBO: How did you spend your time during the strike?
KF: I spent the strike time performing my comedy act, the Lampshades, riding bikes with my boyfriend, I got to go home to Philadelphia a few times. I wrote, I picketed and I sang. I recorded a few songs with the Scrantones and I started to work with a vocal coach again for the first time in years.

SBO: From one website to another, what is it like to write your TV Guide blog?
KF: Writing the TVguide.com blog sometimes feels like writing a term paper and sometimes it writes itself. I still struggle with privacy issues and also what I like to call the "who really cares about this" factor. I forget that even stating what happens with the cast is NEWS to some. I have to have a little fun with it just to keep it entertaining.

SBO: How about a little history? You've done a lot of work in improv and on the stage. What path led you to "The Office"?
KF: All roads have led to the OFfice. I have been doing my own comedy act, the Lampshades for the past 7 years in clubs and theaters in Hollywood, Aspen, Vegas and Vancouver.
After college I moved to Chicago to study at Second City and I auditioned and got into their touring company. I was also working at the Annoyance Theater there doing a ton of shows like the Real Live Brady Bunch(w/ Jan Lynch, Andy Richter, Anna Gastyer, Melanie Hutsell)
I also did the hit show Valley of the Dolls in NYC and LA. I have had a really fun career.

SBO: There's an improv game called "Oscar Winning Moment", let's play Emmy Winning Moment. Could you describe what scene would win you that golden statue for Meredith?
KF: Can you get an Emmy for getting hit by a car?? I did my own stunt!

SO many thanks go out to Kate Flannery for sharing some time, info and of course HUMOR with us!
Posted by ScrantonBranchOffice at 8:52 PM 2 comments:

Kate Flannery Blog - Nights and Daze at The Office

"The scripts just get funnier and funnier. This past week we' worked with Jeff Blitz directing. Jeff directed the "Convict" episode from last season, remember? He is an Academy Award winner for a short film he did in 2007. We have the best directors. Our show's exec producer, Greg Daniels, said he should submit this new episode for an Academy Award. Now, we all know you can't submit a TV show for an Academy Award. (Creed just explained that to me at the water cooler.) Awards are weird. We have the fans to tell us how important we are. I have two SAG Awards on my mantle, for Best Ensemble. The show won an Emmy for Best Comedy last year. The producers are the only ones that get to keep the Emmy. Steve Carrell has won a Golden Globe for playing Michael Scott, but he hasn't won an Emmy for it yet. He is so talented. It is baffling."

You can read Kate's entire TV Guide blog HERE.
Posted by ScrantonBranchOffice at 7:47 AM No comments:

Steve Carell on The Tonight Show

Here's video of Steve Carell's visit to The Tonight Show on April 2nd. Beware they do show a clip from the "Dinner Party" episode.


Posted by ScrantonBranchOffice at 7:15 AM No comments:

It's April 2nd - so this can't be a joke. NBC released the following information:

NEW YORK – April 2, 2008 --NBC announced today that the most coveted time period of the coming season, the post Super Bowl slot, will be used to launch a spinoff of the network's hit comedy series, "The Office." Immediately following NBC Sports' coverage of Super Bowl XLIII, the network will first present an original episode of "The Office," followed by the debut of the new Greg Daniels comedy. The Super Bowl has been perennially the biggest television event of the broadcast season and was watched this year by a total audience of more than 148 million viewers. Giving this new series that coveted premiere slot will afford the show tremendous sampling from all demographic groups.

Greg Daniels, Executive Producer of "The Office," said, "Who would have ever thought that Americans would be subjected to a mock-documentary after the Superbowl? What has happened to this country?"

From Greg Daniels, the Executive Producer of the Emmy Award-winning American version of NBC's "The Office," comes the most highly anticipated comedy of the season in "The Office" spinoff. Audiences will follow another comic journey, complete with new faces and new locations, but with the same unique sense of humor and brand of quality from Daniels and his creative team. It's the next chapter of what viewers have come to know and love about "The Office."

In response to an evolving media marketplace and the changing needs of its advertisers, NBC Universal has created a more innovative, client-centric approach to its traditional Upfront presentation. It will include the announcement of a year-round programming schedule in April; a series of one-on-one client meetings in New York, Los Angeles and Chicago; and a spotlight event on May 12 that will showcase the full scale of the NBCU offerings in a unique, multi-media, interactive environment that will allow advertisers to experience the broad spectrum of marketing opportunities available within the company. The new Upfront process allows NBCU to continue its "customer-first" approach, while working to create new advertising models, define more effective metrics and provide a better return on its clients' investments.
Posted by ScrantonBranchOffice at 3:31 PM 2 comments:

Variety reports on NBC's Upfronts (where they announce next season):

"Shows returning to NBC next season include "ER," "The Office," "Chuck," "Life," "The Biggest Loser," "American Gladiators," "Deal or No Deal" and "My Name Is Earl." Also a safe bet to be back: "Medium," "30 Rock," at least one "Law & Order" skein and "Friday Night Lights." First-year drama "Lipstick Jungle" could also return."

Read the whole article HERE.
Posted by ScrantonBranchOffice at 9:46 AM No comments: 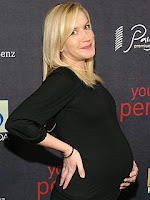 Thanks for being great sports yesterday with our April Fools joke, but I assure you this is all real.

"Angela Kinsey, 36 – who's expecting her first child, a daughter, later this spring – was feted by her Office castmates Saturday during a girls-only baby shower.

"Angela has a lot of sisters and a lot of relatives from Texas who came out," costar Kate Flannery told PEOPLE that night, at the Humane Society's 22nd Genesis Awards. "[There were] a lot of Southern ladies who were sitting around drinking iced tea. No men – it was only the ladies."

The party was at Jenna Fischer's house and Jenna also acted as co-host along with Angela's sister.

You can read all about it HERE.
Posted by ScrantonBranchOffice at 9:39 AM No comments:

Last night I received a call from a very good friend who lives in Hollywood and I HAD to share.

My friend, whom (did I use that right?) I cannot name because he signed confidentiality papers, is a struggling actor in L.A. and answered a casting call for an NBC sitcom looking for extras. He got the role and when he arrived to work he couldn't believe what it was for.

He arrived in Van Nuys, CA to shoot a scene in a pediatrician's office... the reason? ANGELA is pregant! Yes, ON the show! My friend is simply another expecting parent in the waiting room FULL of people, but he said that Angela is there and who is there with her? DWIGHT!!

My friend got to sit in the same room with Rainn Wilson and Angela Kinsey. He said the scene is VERY funny and didn't want to give it all away, but said we will all SCREAM with how they are going to explain how the baby happened!

He even was able to sneak a photo on his phone, it's a little grainy, but you can definitly see proof!

I'm sorry that this is a huge spoiler, but I had to share! Click HERE to see the photo!
Posted by ScrantonBranchOffice at 7:11 AM 6 comments:

LIVE from the Leatherheads Premiere!

Posted by ScrantonBranchOffice at 10:23 PM No comments:

Reliant K Sings about The Office in Concert!

Watch and enjoy this little clip someone shot at a Reliant K concert. They sing a nice ode to "The Office" and more.

Posted by ScrantonBranchOffice at 3:30 PM 5 comments: