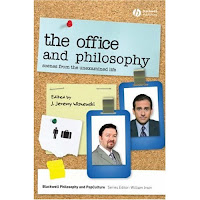 Blackwell Publishing has recently released a book entitled “The Office and Philosophy – Scenes from the Unexamined Life”. The book explores philosophy found within the BBC and NBC versions of “The Office” and was edited by J. Jeremy Wisnewski.

Political correctness, sexual harassment, business ethics, office flirtation, and humiliation are hot button points that show up in this snapshot of life. Even as it captures something of the human condition, “The Office” put the ‘fun’ in dysfunctional. “This is philosophy that is meant to introduce you to, and help you understand, issues in a way that is as enjoyable as the show itself.”

J. Jeremy Wisnewski is an Assistant of Philosophy at Hartwick College. He is the author of “Wittgenstein and Ethical Inquiry: A Defense of Ethics as Clarification” (2007) as well as the editor of “Family Guy and Philosophy” (2007). According to his biography his next project is to play Michael Scarn in a new production of “Threat Level: Midnight”. (No, not really.) Recently I was able to sit down for a conversation with Jeremy about the book. Enjoy!

ScrantonBranchOffice: Hey, how are you Jeremy?
J. Jeremy Wisnewski: I’m good, how are you?
SBO: I’m doing well thank you.

SBO:This is a great book as far as philosophy goes in general, but what made you and the other writers decide to gear it on The Office?
JJW:From moment one, when I started seeing the promos for The Office, I was immediately intrigued. I saw the US version first. When I started watching it, both the US version and later on the British version, I just knew there was something there. It seems as though the show is really capturing something universal. I think that is evidenced by the fact that there’s a US version, a British version, a German version, a French version and a Canadian version. All of these shows are tapping in to a lot of things, but one of the things they’re tapping into is the struggle for meaning in advanced industrial nations. That’s a large way of saying, I guess, that work stinks and it’s very difficult to get any meaning out of what you do. It’s very difficult to be a paper pusher.

Continue Reading...
Posted by ScrantonBranchOffice at 11:52 AM